I’ve been arguing repeatedly that trying to get the Viable System Model from overviews, introductions and writings based on or about it, can put the curious mind in a state of confusion or simply lead to wrong interpretations. The absolute minimum is reading at least once each of the three books explaining the model. But better twice. Why? There are at least two good reasons. The obvious one is to better understand some points and pay attention to others that have been probably missed during the first run. But there is also another reason. Books are of linear nature and when tackling non-linear subjects, a second reading gives the chance to better interpret each part of the text when having in the memory more less all other parts which relate to it.

Still, one of the things that are expected to be most helpful is in fact what brings about either confusion, aversion or misuse: the VSM diagrams. They clearly favour expected ease of understanding over rigour and yet in some important points they fail in both. Here is my short list of issues, followed by description of each:

Representation of the channels

Stafford Beer admitted several times in his books the “diagrammatic limitations” of the VSM representations. Some of the choices had to do with the limitation of the 2D representation and others, I guess, aimed to avoid clutter. Figure 26 of “The Heart of Enterprise” is a good example for both. It shows eleven loops but implies twenty one: 3 between environment, operations and management, multiplied by 3 for the choice of showing three operations, then another 9 = 3×3 for loops between same-type elements and finally 3 more between operation management and the meta-system.

Confusion about operations and their direct management

Depending on the context, System One refers either to operations or to their direct management. In some diagrams S1 is the label of the circles, and in others – of the squares linked to them. Referring to one or the other in the text, depending on which channels are described, only adds to the confusion. That is related to the general problem of

Notation and labelling of systems

All diagrams representing the VSM in the originals writings and all interpretations I’ve seen so far, suggest that circles represent System One, and triangles pointing up and down, represent System Two and Three* respectively. Additionally most VSM overviews state exactly that in the textual description. My assertion is almost the opposite:

What is labelled as S1 and what is shown as circles are both not representing S1.

That might come as a shock to many and yet, now citing Beer, System One is not the “circles” but:

The collection of operating elements (that is, including their horizontal and vertical connexions)

The Heart of Enterprise, page 132

Well, strictly speaking a system is a system because it shows emergent properties so it is more than the collection of its parts but even referring to it as collection reveals the serious misinterpretation when taking only one of its parts to represent the whole system.

They show something in between generic and example model

Communicating such matters to managers trained in business schools wasn’t an easy task. And it is even more challenging nowadays. There is a lot to learn and a even more to unlearn. It is not surprising then that even in the generic models typically three operations are illustrated (same for System 2).  Yet, I was always missing a true generic representation, or what would many prefer to call “meta-model”.

It can’t be repeated enough that the VSM is not an hierarchical model, and yet it is often perceived and used as such or not used especially because of that perception. It seems that recursivity is a challenging concept, while anything slightly resembling hierarchy is quickly taken to represent one. And sadly, the VSM diagram only amplifies that perception, although the orthogonality of the channels serves an entirely different purpose. Stafford Beer rarely misses an opportunity to remind about that. Nevertheless, whatever is positioned higher implies seniority and the examples of mapping to actual roles and functions only help in confirming this misinterpretation.

There are other issues as well but my point was to outline the motivation for trying alternative approaches for modelling the VSM, without alternating the essence or the governing principles. Here is one humble attempt to propose a different representation (there is a less humble one which I’m working on, but it’s still too early to talk about it). The following diagram favours circular, instead of orthogonal representation which I hope achieves at least in destroying the hierarchical perception. Yet, from a network point of view the higher positioning of S3 is chosen on purpose as the network clearly shows that this node is a hub. 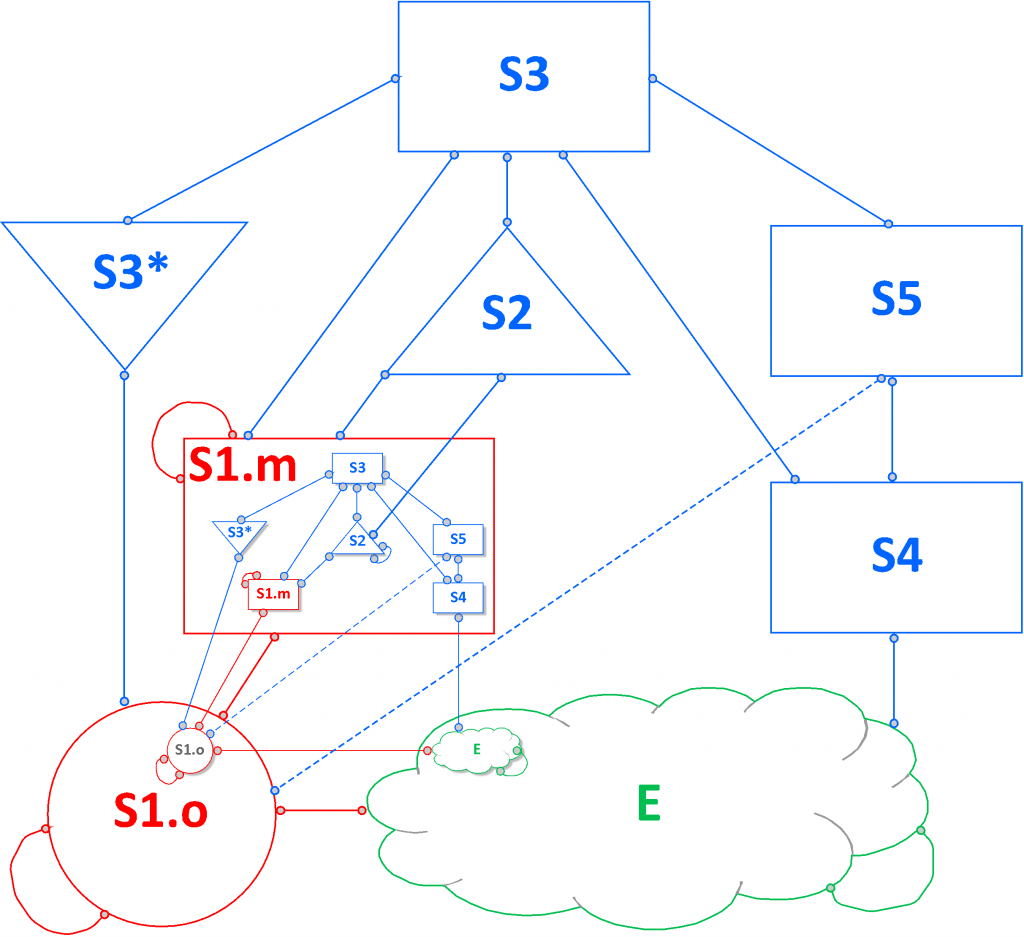 System One is represented by red colouring, keeping the conventional notation for the operations (S1.o) and their direct management (S1.m). As mentioned above, apart from solving this, the intention  as to have it as a generic model. If that poses a problem for those used to the hybrid representation, here’s how it would look if two S1s are shown: 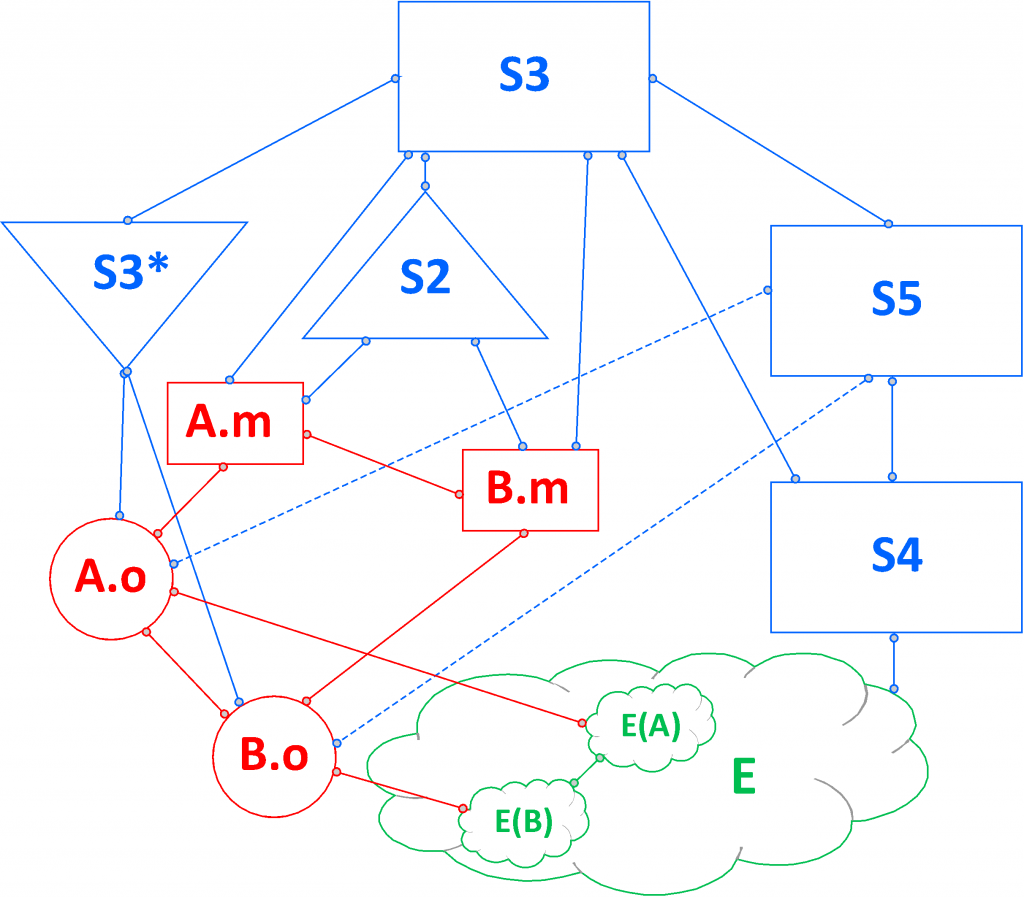 I hope this proposal solves fully or partially the five issues explained earlier and brings a new perspective that can be insightful on its own. In any case the aim is to be useful in some way. If not as it is now, then by triggering feedback that might bring it to a better state. Or, it can be useful by just provoking other, more successful attempts.