Beliefs are powerful. Sometimes, to achieve something, all we need is to hold on to our beliefs. Then there are times when we can’t get where we want to be, unless our beliefs are shaken and eventually changed.

Let’s explore this a bit.

Our conscious actions are based on conscious decision and unconscious determinants and all of them — on our beliefs. Our actions change the environment and ourselves and then we sense and interpret the changes which in turn influence our beliefs and actions. One way to see these interdependencies is by using the ladder of inference of Chris Argyris. You can easily find a lot of resources based on the original model on the web. Here I’ll build on an interpretation by Gene Bellinger where it’s represented not as a ladder but as a reinforcing inference cycle.

From the observable data and experience we select some and affix meaning to them. This feeds our assumptions. And then we come to conclusions which in turn influence our beliefs. Our beliefs determine our actions. Our actions bring more data and experience from which we select some, affix meaning and the cycle repeats. We tend to believe that we affix meaning to the observable data, oblivious of the selection we always make. In a similar way we believe that we draw conclusions by clear reasoning, while we actually always apply some assumptions.

I’ve made a few modifications to this cycle. The first one is making some of the choices explicit. We make choices in several places in the cycle, notably before Actions but also after Observable data where we choose what to pay attention to. We make choices also when we try to make sense of it. For now, I added only one more variable: ‘Decisions’. It comes before Actions and after Beliefs. Our Actions are based on Decisions that are influenced by our Beliefs. 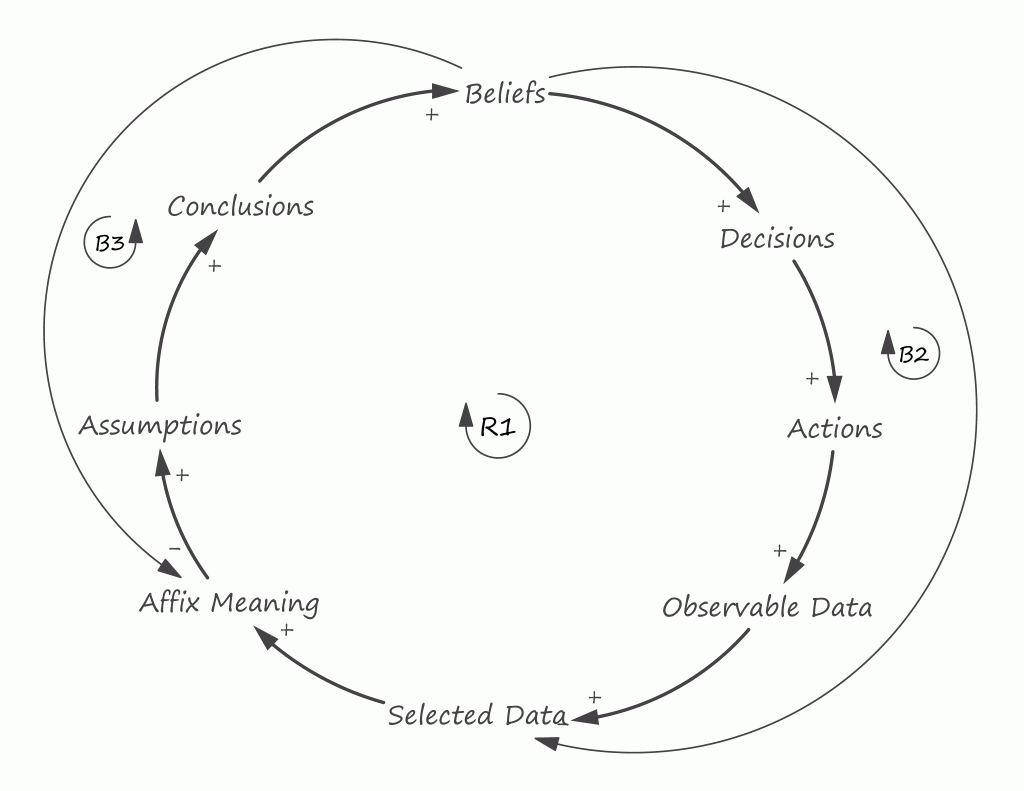 The second modification is the addition of another direct influence, the one between Beliefs and the sense we make out of the selected experience. Our beliefs reduce our perception range (the balancing loop B2), as well as the way we select what meaning to affix to what we have chosen to pay attention to (the balancing loop B3). Thus Beliefs affect three types of choices we make: on actions, on the selection and on the interpretation of data and experience. Now we have three loops and depending on which one of them is stronger, the system can work in different ways. It can work as a learning cycle or as an obsession. It can work also as something which I call ‘sustainable system of fallacies’.

Yes, Beliefs influence directly action, selection, and interpretation but they go even further than that.

As with beliefs above, it’s easier to use something that has proved working than starting from scratch. My choice of model here is the logical levels of Robert Dilts. Again I made a small modification but only to the style:

This model is useful in a range of domains, from communication and therapy to management and leadership. Dilts gives a good communications example with the different choices a teacher has for commenting on a student’s poor results on an exam. The suspected cause can be a noisy room, thus giving feedback at the environmental level. Alternatively, the teacher can point out that particular performance instance, thus addressing the student at the level of behaviour, or comment on student’s current skills on the examined subject which are at present less developed than on other subjects. That is an example of communication at the level of capabilities. Yet another option is to discuss the importance of this subject and by doing so to touch the value system (level of beliefs). And last, of course, is the worst choice, calling the student stupid, hitting the student at the level of identity.

According to Dilts, “a belief is a generalization about a relationship between experiences”. He points out more specifically those about causal relationships, meaning and limits. The latter seems very pertinent to the way beliefs influence capabilities. But there are other ways as well.

An insight on those comes when we merge the two models. All variables in the cycle of inference, with the exception of Observable data and experience, are influenced by a certain type of capability. The most obvious one is our capability to carry out the chosen Actions. It may be an existing one which we have access to and can use, or one that exists but we are not conscious of and don’t have access to. The third case is when the chosen actions need capabilities that we have to build or buy.

While looking at this model we shouldn’t forget that one’s inference cycle is linked with inference cycles of others. One such influence can be easily seen when we look at Decisions. When a politician makes certain promise during elections that would create experience for others and expectation, for example, that the promise will be kept. Many cycles later, that politician may have other beliefs, based on new experience but decide to make actions based on old promised to maintain the perceived trust although she may believe that these actions would not have positive outcome to those whose expectations should be met. Or the opposite. She may follow her new beliefs which would fulfil the expectation of those who did not believe in initial promises and disappoint those that did, thus having less support to carry out the chosen actions although they might be those that would bring better outcome for both groups. The choice would depend on values. And beliefs and values are very closely connected.

There are more findings to share about all the variables in the cycle and those representing some types of capabilities. But let’s first apply it to itself and try to put it in a learning loop:

I believe that this model, which is based on some filtering and sense-making choices, now that is published, will add to the available data and experience, which will provoke hopefully some feedback to add more data, on which we’ll make new selections and will probably change our assumptions, conclusions and eventually beliefs. Then, based on what we’ve learned, we might come up with a better model.

5 thoughts on “Beliefs and Capabilities”